Paul and Vicki Young
Paul Young is a missionary, chalk-artist evangelist, based in Cape Town, South Africa, with his wife Vicki (usually the blog updater.) and sons Tim, 23, Josh, 19, and always remembering Cherish, forever 2. Daughter Evangel flew the coop in 2015, and has become wife to Ryan Ford and Mom to Clarity and Cyrus. Goal: To encourage others in evangelism. 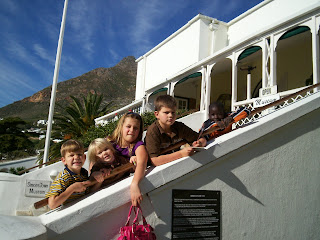 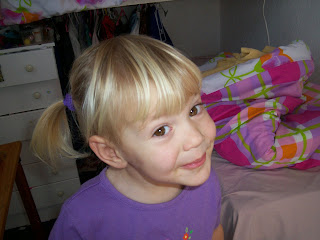 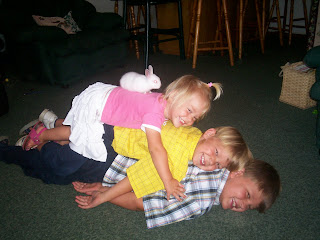 I want to always emphasize how the Lord has blessed us, and how he has kept His promises to us. I’ve chosen mostly some of the good stories, the fun things that have happened. I don’t ever want to be like the 10 spies, complaining, discouraging others who are thinking of going into the Promised Land.

There are rough times, but there are promises for us in them too. One is “They that sow in tears shall reap in joy.” Psalm 126:5

In 1993, we were invited to Miami for the first time to preach at a large Christian school and church for a week. We were excited, but didn’t realize all that we would have to go through to get there.

First of all, we totaled our car in Anderson, Indiana, the night before we were to leave for the South which was discouraging. We hadn’t had that car very long, and were so enjoying the way it was so fuel efficient.

Paul’s brother Joseph bailed us out by loaning us his car to continue traveling in, so we set off for South Carolina in that. As we drove, the clutch
began to slip on that car, but we made it to South Carolina in time for meetings there.

The Pastor there was very kind, and said, “Leave that car with me, and take our church mini-van, and I’ll get this one fixed.” So we set off in this third car, still heading for Miami. We made it just south of Augustine, Florida, and we blew the engine out on that beautiful mini-van! The kind South Carolina pastor told us of a friend of his who would fix it for us, so we left it, and tried to rent a car.

At that stage, we didn’t have any credit cards, so we couldn’t rent a car. We ended up getting tickets on a Greyhound Bus. Instead of arriving Saturday evening as we had planned, we were now scheduled to get in around 5:30 Sunday morning.

It was a long night. I couldn’t sleep much on that bus, though Paul seemed to do OK. There were two guys talking near me, comparing the merits of different prisons they had been in. We had a layover in Orlando, and finally chugged into the bus station in Miami, around 4:30 in the morning. The pastor’s wife had told us that her husband couldn’t come to get us until 6 a.m. as that was a dangerous part of town, so we settled on a bench to wait. The pastor himself had other plans, and he was there already waiting for us, but we didn’t know it. So we waited on our bench, and he in his van until 5:30 when we found each other. Then we had to wait some more. The Greyhound people wouldn’t give us our luggage until 6!

When they did give us our luggage, we discovered that one piece was missing, the one we needed the most: Paul’s chalk equipment. They told us it would be in on the 9 a.m. bus. Paul was supposed to preach at 9:45.
The pastor took us to his home to get breakfast and a nap before church. After we got all settled in the van, after all those problems and aggravations, the pastor said, “You know, we never did confirm these meetings.” That’s when the tears came.

Then came the “reaping in joy” part. The chalk equipment arrived in time, and Paul did preach in his Sunday school and church. That first Sunday there were over 200 people present, the following Sunday over 600! Each day, Paul preached in the school of about 1000, and saw great results. The pastor and church family were very kind to us with many of them having us in their homes.

(P.S. In case you’re wondering about the car, a Miami family very apologetically gave us an old Reliant station wagon, if we wanted to try it. It got us as far as South Carolina again, where we gave it to someone else who had more time to fix it up, and we bought another one. People were picking up broken cars from us for weeks! The Reliant burned up on the side of the road soon after that.)

We are thankful for the 100 + houses the Lord has provided here on earth, and I think there must be more coming when we go to heaven. “I go to prepare a place for you” is the promise Jesus gave. Having seen His provision on earth, it is easier to believe that He will care for us well in the next life.

We’ve had other difficult times, but the one that stands out far above the others was when our little girl Cherish went to heaven.

You read back in the chapter about baby births about how Cherish’s birth was, by far, my easiest. She continued to be a dream baby. She began smiling at people when she was only 3 days old. She would smile for a camera soon after that. One thing I enjoyed about her, was that she actually liked to take naps. Before she was a year old, she would go to bed hugging a book to her chest. I envisioned her learning to read as a three year old.

When she woke from a nap, she wouldn’t always cry quickly to be picked up, but instead I’d often find her playing happily alone in her crib. She enjoyed her own company.

Once in a sing-song, tattletale kind of voice, four-year old Joshua reported from the living room, “Mommy, Cherish is being annoying.” Then came the indignant, “No, I’m not, I’m nice!”

Cherish always wanted to be involved with whatever we were doing. When we played our homemade version of Balderdash, a game much too old for her, Cherish would grab one of the little slips of paper and scribble a little bit on each one. She would hold it up to my eyes until I felt cross-eyed, and then demand, “Read dat. Read dat.” I would make up something like, “I love my beautiful Mommy,” and she was pleased with her writing results.

When we played the Matching game at the table during meals, she and her daddy would agree that her answer was strawberry ice cream, no matter what the question. If they were to match a state capital, a favorite dog breed, or a team sport, her answer was always strawberry ice cream. She and her daddy would high-five each other in delight over her brilliant answer.

I had visions of Cherish being a nurse when she grew up, as she was such a motherly little person, and so sympathetic with anyone who was hurt or even sleeping. She would pat her big brother Josh’s brow when he fell asleep at an odd time or in an odd place and try to help him to bed. One time I found the two of them under our bed, just about to partake of the delights of a bottle of Echinacea tablets.

She was a precious little one, a very loving child, and the beloved baby of our family. She was two years and ten months old when she got sick one night. Her sickness lasted less then 24 hours, and then she died in Paul’s arms in the Red Cross Children’s Hospital in Cape Town.

I had decided long before that I would say, “The Lord giveth, and the Lord taketh away, blessed be the name of the Lord,” as Job did when his loved ones died when I lost someone close to me. We did say that, and then we turned to the Lord for comfort. “Blessed be God, even the Father of our Lord Jesus Christ, the Father of mercies, and the God of all comfort, who comforteth us in all our tribulation, that we may be able to comfort them which are in any trouble, by the comfort wherewith we ourselves are comforted of God,” (2 Cor. 1:3 & 4).

I was very interested to see how the Lord would comfort us. I have never known what to say to people when they lost a loved one, so I started making a list of all the ways He comforted us.

Cruising around the world staying in over 100 houses has given us friends all over the place. One of the comforts the Lord gave, was the sympathy of these dear people, our Christian family.

In Cape Town, friends arrived to comfort and cry with us. They came from my Bible study and book club, prison workers showed up, and friends from churches and schools where Paul has preached. Fellow homeschoolers brought food, and our dear friend Delgun helped with funeral arrangements as neither of us had a clue on how to go about that.

Our friend Zelda had already learned how to comfort from the comfort she had received. She had lost her husband to cancer earlier the same year. She showed up at our house with a huge cookie mix on the second day, and she comforted our children as no one else. She and her daughters led them in making beautiful decorated cookies in the kitchen while the grown-ups cried in the living room. I wouldn’t have known how to reach out to someone’s children at a time like that, but now I do. It is still a great memory for our kids, and was a great example for me.

Every day e-mail poured in, and I remember sitting with tears pouring down our faces reading dozens of letters from friends who were hurting with us. Most cards and paper letters didn’t arrive for weeks, because they were sent to our American address, my parents’ house, and our parents were not there. They were busy comforting us too! My mother and niece flew over from America to be with us for two weeks! So the cards and letters arrived when we were on a preaching trip, and the comfort continued even though we were far from close friends.

I learned that there is no one big wave of comfort, where the pain just vanishes and that’s the end of it. Instead there was more like a gentle rain of comfort, gradually lessening the hurt, and growing more trust in our God. It continually helps to remind ourselves of where Cherish is, who is caring for her, and that “In thy presence is fullness of joy, at thy right hand there are pleasures for evermore” (Psalm 16:11).

That final house is sounding good! We get longing for it sometimes. I’m collecting verses on what it is like there where our little one is, but I think only the tip of the iceberg has been revealed. There we’ll see the One who has saved us-Jesus-the One who has saved our children. We’ll really know Him, not just the misty idea we have now, and we’ll finally be like Him, free from this nagging sin that plagues us now.

God’s word has many promises like this one, and mostly they have a condition that has to be fulfilled. In our case, we had to obey to receive our blessings, and that’s normal.

No, the Lord has a carrot bunch dangling in front of us, with perks egging us on. We believe in what we do; we believe we’re making a difference as we see people give their hearts and lives to God and know that we had a part in that. He gives us joy in the journey. He fills it with beauty, fun, and good times with His people.
Posted by Paul and Vicki Young at 10:35 AM