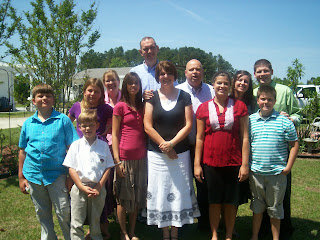 A family in Sioux City, Iowa, became very dear to us when we joined them for special meetings in the church they were trying to begin. They had seven boys when we first knew them, and they went on to add three girls to their family, just like Job’s second family. David and Elizabeth were so kind. When we stayed with them, they’d give up their bed for us and go sleep on the living room floor.

One night their littlest boy, Brandon, pushed open their bedroom door and came padding in softly calling for his mommy. I hardly dared to breathe for a moment. What would he do when he found the wrong people in his parents’ bed? I could imagine screaming or crying, but I mustered my courage and whispered, “Brandon, your mommy’s downstairs.”

I guess when you’re the youngest of seven boys, you’re tough enough to handle a little shock like the wrong people in your parents’ bed. Without a word he silently padded out again.

In one of those church meetings, Brandon professed faith in Jesus. Paul preached and drew, and invited people to be saved from the consequences of their sin. Three-year- old Brandon raised his hand that he wanted to be saved. Brandon’s mom saw him from the piano stool where she was playing the closing song. She made a mental note to talk to him to see if he really understood, but she had to hostess the fellowship time after church, take care of baby Emily, then rush home to get everyone to bed.

She wrote us later what happened. She was driving somewhere in the car with Brandon some time after the meetings had ended. She remembered guiltily that she had never talked to Brandon when he had raised his hand to say he wanted to be saved, so she asked him if he would like to get saved.

His mom agreed that it was. We were so glad when she took the time to tell us about it. Brandon is now about grown up, and we have heard he is still serving the Lord, going on missions trips.

We seemed to collect big families in our travels in the USA. We consider these friendships to be precious, and they have enriched our family immeasurably.

In North Love, Illinois, the Huber family invited us to their home after church services one Sunday. I sized up the young couple as they were pointed out to me before we met them, and quickly concluded, “Yuppies.” I wondered what we would find to talk about with this young, perfect looking couple though I noticed Joni was expecting. It was probably her first child so maybe I could share with her my great depth of wisdom I had acquired in the one year since we had our first baby.

Boy, was I in for a jolt. My “yuppie” couple was actually expecting their seventh child! They may have been perfect looking, but that did not hinder them from serving the Lord. I spent that first day at their house watching, listening, and learning from this sweet, wise couple. Instead of groping for things to talk about, the conversation was dynamic, and turned deep and serious. We stayed longer then we intended, and I remember ending the evening holding hands, on our knees, praying in their living room.

Here was a family who not only shared their home with us, they built us up,
challenged us, and gave us a visual godly example of a beautiful family who lived right, and made hard decisions for the good of their family.

I remember watching their little boys tearing around with cowboy gear and guns. I was still considering whether it was okay for Christians to let their kids play with guns. I don’t remember Joni’s exact words, but she mentioned something about how she was raising men, and their play was actually practice for something they might be called upon to do as men.
* * *

In Steinhatchee, Florida, Brother Richard and Miss Gwen have endeared themselves to our family in several unique ways. They are the only people who have ever taken us scalloping! They live right on the Steinhatchee River which opens out into the Gulf of Mexico, and they have toured us up the river and out into the Gulf in their different boats, showing us the sights and taking us fishing. One time when we visited they had an orphaned fawn wandering around tamely on their front lawn.

When they took us scalloping, I was fascinated. I didn’t know scallops have little neon blue “eyes” that shine out in a row between the two curved lips of their shells. What a beautiful thing! I was delighted to get to eat them afterward, such an expensive food, free for the taking--if you have a license, and dear friends with a big boat, and a few other details.
* * *
In Lancaster, South Carolina a pastor and his wife took us into their big, beautiful home, and made us laugh. We laughed with them until I was in pain! Not long after our last visit with them, the wife went to heaven, but what a precious thing to remember a couple for, laughter.
* * *
In Windsor, Florida, a church has made what looks like the ideal Christian community. Many of the church people have settled in mobile homes across from the church and school down a lane that drips with Spanish moss. Family and friends live within walking distance of each other, and the kids can always find someone to play with. They welcome us into this community each time we visit, and I yearn to settle there too. It’s not what the Lord has called us to right now, but it’s nice to know such places are there.

One memorable time when we were staying there, we got the call that Paul’s Dad had gone to heaven. Because Paul had a full preaching schedule, we weren’t sure if we would be able to make it to the funeral. (Sounds radical, I know, but we actually believe Matt. 8:22 and want to make sure we don’t neglect our calling to go to funerals.) I called his sister Grace to see what I could do to help from afar.

Grace asked me to share the call load so she gave me a few numbers to call. I checked with our host before calling, and told him I would use a calling card so he would not be charged. He said, “Don’t you dare use a calling card!” He told me all calls on his line were free because he had retired from the phone company, and they had given him this deal. Wonderful! Grace gave me more numbers. It’s wasn’t a pleasant job, calling older people and letting them know that another person their age had gone on ahead to heaven, but it was sweetened by the kindness of this man who let me make all those calls for free.
Posted by Paul and Vicki Young at 4:15 AM