An old definition of "Worship"is to "make like a dog" so I thought I'd stick a picture of our dog Berwick, with little Daniel, her "cousin" looking in through our security bars. 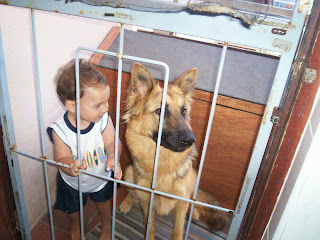 Paul and I both believe fervently in having a time alone with God each day. In fact, Paul has written a concise little book called How to Have a Time Alone with God to help others get started. However, in our travels, as you can imagine, it’s sometimes challenging to get alone with the Lord as we sometimes only have one room for the whole family (like in a hotel), or sometimes just two rooms.

Let’s just say we have spent a lot of times in hotel bathrooms, not because of plumbing problems, but in order to be in a place where we can use a light. If we stay in bed, we’re liable to fall asleep in the middle of a prayer, or bother the sleeping spouse with a sigh or with whispering. Bathrooms are not bad places if you remember to bring a pillow.

The place is not only important, the timing is important. Even a bathroom loses its sense of solitude if four other people need to get in to brush their teeth or whatever. Paul is often up at 4 a.m. until 5:30 or 6 a.m. with the idea of catching a nap from 6-7 if there’s time. I try to get up around 6, so we’re often a tag team passing with a quick peck.

Why don’t we just share a room and a time? We do occasionally. We did yesterday, in fact, but we’re like two best friends in school who can’t be seated together or they’ll whisper. We get to fellowshipping instead of worshipping.

When monopolizing the bathroom is not an option, we sometimes retreat to our own car. This retreat doesn’t work if it is too hot, too cold, or too dark, but sometimes it is just right. Sometimes, however, Paul sees prostitutes and their “lovers” separating in the early morning hours after a night of revelry at the hotel. The frequency and brazenness of this is disturbing, and we ask ourselves what we can do to make a difference. We come back to simply continuing on in what we are doing—Drawing Others to Christ. He loved prostitutes enough that He did not leave them in their own sin, but called them to be His followers.

Paul has a plan for days when he must be on the road very early or for long hours. He listens to the Bible on cassette as he drives which makes the drive more interesting and profitable. One time his Bible reading tapes got him out of hot water.

Paul was driving in Kentucky, happily eating a sandwich he had just made while driving, when a policeman pulled him over. He had not been speeding (He rarely speeds, even when his wife’s in labor as I well know from Evangel’s birth.) Paul was not sure why he had been pulled over, but the police officer was acting very cautious toward him, and was obviously trying to sniff his breath.

Ham sandwich was probably the only result of his nose test, but his eyes were also scanning the inside of the car, looking for clues. He saw the box with the four boxes of cassettes with HOLY BIBLE in big black letters down their spines, and his manner changed abruptly. “Oh, are you a minister?” he asked. And Paul was soon on his way, marveling at the power of God’s name, pleased that God and His Word are still respected in Kentucky.

In thinking it over afterward, Paul figured he had probably strayed toward the side of the road while he was making his sandwich, and a truck driver may have reported him as a drunk driving suspect.

For years, the biggest interruption to our time alone with God has been our own children. Both of us hated to just brush them off so that we could be alone, knowing it looks selfish to them. We step in to run interference for each other, so that one is more “on duty” with the kids while the other is hiding behind a closed door.

Another thing we have done occasionally is to just include them in our time alone. Paul’s favorite spot, when we’re in Cape Town, is in his big black recliner in the living room. He would just scoop a little one up on his lap, and change his Bible reading to a section that little one might appreciate the most, like Daniel or Jonah or especially Elisha and Elijah.

In the early days of our marriage, on a trip to Guatemala, we were spending the night in an “elegant” hotel that cost about $5.00 a night for the two of us. It was charming, as can be imagined from the price. I wasn’t sure I should blame God for providing this one for us; maybe it should just be considered an overzealous attempt to live frugally. But I do consider it one of the 100 houses because it was so memorable, and broadened us in ways we needed to be broadened. It also has fun shock value. I love sharing about it with some pampered people who have never traveled.

It helps to have read an Isobel Kuhn book right before staying in a place like this. If I have just read Isobel Kuhn, I then look at roaches as part of the adventure story we’re living, and imagine how I will describe the hundreds of them with their wiggly antennas looking at me from a rough dark wall. The sound of a drunk spilling his innards just outside our door can become something to giggle about with Paul, as we congratulate ourselves on the charming hotel we have selected. We really congratulated ourselves on our wisdom in buying exotic towels as souvenir gifts for our family, as the single blanket was too small to cover us both, and too thin to warm us. We hoped the family wouldn’t mind if their Christmas gifts were slightly used.

As with other mornings, Paul and I were being a tag team. He got up to do his Bible reading, while I dutifully kept the bed warm for his return and caught a little more sleep. A short while after he came back, I got up to go where he had been, sitting on a little bench outside our room facing into the communal courtyard. It worked for him, but by the time I got there, our neighbors were starting to stir.

A pretty young woman came out of the little room across from us and saw me reading the Bible. Her opening line, in Spanish, was, “Oh, are you a Christian? So am I.”

You’ll excuse me for being skeptical, but this girl had obviously either never read what the Bible has to say about a woman being modest, or she chose to ignore it. A few minutes chat revealed she was also a dancer in the topless club adjacent to our charming hotel, and she was spending the night with a customer.

This meeting was so important for us. It left me flabbergasted because of her opening words. How could a person, living as a prostitute, who could quote many verses, call herself a Christian? Didn’t she know right from wrong? Didn’t she know we serve a righteous God? Yes, but she believed grace covered all. Yes, if you repent. “Be not deceived: neither fornicators …nor adulterers… shall inherit the kingdom of God” (1 Cor. 6:9,10).

This encounter was just one of the little steps that led Paul, (my husband, not the apostle) to write his book Saving Faith, Does It Involve a Change of Behavior? Yes, it does! “Faith without works is dead.” It’s appalling to see someone take the name of Christ in vain.

I did keep in contact with the young woman, Doris, by letter for months, until she quit writing after we failed to supply $500.00 to get her brother out of prison in Arizona.

So my encounter with Doris would be considered a failure as time alone with God, but definitely an experience that the Lord used to shape us.
Posted by Paul and Vicki Young at 3:43 AM