The church in Heidleberg, Germany blessed us with a trip to Bavaria and an opportunity to see some German castles. 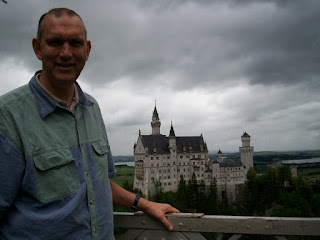 Cinderella's castle at Disney World was inspired by this German castle. 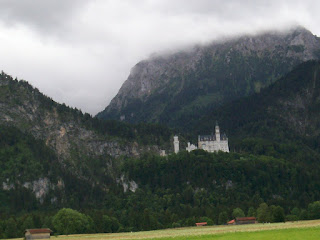 We have stayed with many kind people, but there are some who have gone the second mile and beyond for us. We have dear friends in southern Georgia who have put us up in their double-wide trailer for weeks at a time. Sherrie was just a few weeks ahead of me in the child rearing business, so she and I became friends quickly and enjoyed long talks hashing over all the details of child birth and babies.

During the summer of 1996, we were scheduled to stay with Greg and Sherrie for two weeks while Paul preached at their church’s camp. We were supposed to eat in the camp’s dining hall, but Sherrie opened her own kitchen to us, stocked especially with peanut butter and eggs as she knew Paul needed them in his diet. I’d call that going the second mile, but none of us realized how much further than that she’d go!

On Friday of the first week of camp, Paul and I decided to squeeze in a horseback ride before I had to be at the pool to lifeguard for the girls’ swim time. We made sure seven month old Evangel was asleep for her afternoon nap, then we rather breezily asked Sherrie if she would mind if we left Evangel sleeping while we went horseback riding. She easily agreed. She might not have been so quick to agree if she had known I wouldn’t be back for three days.

It was a typical hot, steamy Georgia afternoon. The horse I was riding was not in the best of moods, and my riding was no help. He was used to being ridden Western style, so I tried to ride Western, but kept reverting back to the English style I was used to. It seemed to irritate the horse, and finally he had had enough. He ran under a tree, planted his feet and sent me tumbling over his left shoulder.

Paul saw my glamorous fall and hurried toward me on his horse. He was having troubles with his horse too-- a retired race horse who wouldn’t deign to go faster then a plod. He soon realized he’d get there faster by using his own legs so he jumped off and ran.

I lay stunned for a moment, then felt around for my glasses. I found them unbroken, and waved them at Paul in relief. I wanted to hurry to assure Paul I was OK as I could hear him running toward me, but his first words ended my illusion that I’d be all right in a minute. He took one look and said, “You have a broken arm.”

Late that night my arm was pieced together with a plate and 12 screws. The bone had broken into five pieces.

Sherrie kept baby Evangel along with her own one year old from Friday afternoon until I finally got out of the hospital on Monday. My parents drove 1400 miles to arrive in Georgia on Monday to take care of me and Evangel so Paul could go preach at his next week of camp. (They are second milers too, but family doesn't count.) Even after we moved into the trailer next to hers, Sherrie continued to help us in many ways, including bringing us the best pound cake I’ve ever eaten.
* * *

Another family that hosted us during a medical crisis was thousands of miles away in South Africa. In 2000 we were still years away from moving there, but we were on a trip so that Paul could preach in the schools there. We were staying at Skogheim Christian Conference Center, but they needed us to leave for a few days to accommodate a large group. They sent us to stay in an apartment of a nearby family who had a huge house overlooking the Indian Ocean, and a private apartment at the back. We scarcely saw the family at first, until an emergency forced us together.

I was newly expecting a baby at that point, but things were not going well. It looked hopeless to me, but I went to bed to try to give things a chance to heal. Paul took our Evangel and Timmy, then 4 and 2, in the car to the beach to play to help me rest. I did rest too, for an hour or so, then the sun started to set, and I began to wonder what had happened to Paul and the kids. Fear began to set in and I could not stay in bed any longer. I got up and got dressed with visions of something terrible having happened to one of the kids. I could clearly see (in my imagination) Paul desperately searching the waves for the body of Timmy or Evangel, unwilling to come home without finding them.

I cleaned the whole apartment, I prayed, and I cross-stitched until it got so dark I couldn’t see any longer. Finally, I went to the people who owned the house to ask for help. I hadn’t really met them properly at all, but when I began to talk to them, I just burst into tears and couldn’t talk. They were immediately kind and helpful. They waited until I could explain, and then they took over; the husband loaded me up to head for the beach.

Before we even got to the beach, Mrs. B. called on the cell phone to say that Paul was just stuck at the beach with car troubles. What a relief! Now I was just so embarrassed about my panic, but Paul and the kids really did need to be rescued so we continued on to the beach and brought them home.

Because of this, we got to know the B’s a little. I explained that I was probably more emotional because of the physical problems I was going through, and they jumped in to help on that. Mrs. B arranged an appointment with a doctor who confirmed that I was having a miscarriage and helped get me sorted out before we flew off to Kenya a few days later.
Their help may have saved my life as there was a chance of infection setting in.
* * *

Ask our kids to list their favorite people to stay with, and very soon one of them will yell out, “Pastor Hicks!” He and his wife have endeared themselves to our children more then nearly any other pastor. He understands that kids who have been in the car all day do not want to sit and hear their elders talk. He’d help unpack, and then say, “Do you want to see the rabbits?” or “Do you want to swing on the swing?” (It’s a huge swing, on a high tree on the side of a hill!) or “Do you want a ride in my jeep?”

Pastor Hicks has taken our kids fishing, and taught them to watch for satellites in the night sky. He inspired Evangel in the idea of raising rabbits, though she has never arrived at the point of eating them like he does. He and his church touched our family very much by planting a cherry tree in memory of our little Cherish who went to be with the Lord August 6, 2006.

Their home in Pennsylvania could easily be featured in Better Homes and Gardens because of all the special touches he and his wife have added to it. He took some wild hillside land and has made it a gorgeous, productive garden complete with a pond stocked with fish. They are an inspiring family to visit, and they make me think of pleasing the Lord by subduing the earth and having dominion over it and His creatures.
* * *

Before we even got married, another couple got on my “second milers” list. We were staying at a camp where Paul was preaching, but there were no meetings on Saturday so we decided to get some inner tubes and float down the Alapaha river, which forms part of the border between Georgia and Florida. I don’t remember what we did all day to make us get such a late start on our float, but it was really late in the afternoon when we put our tubes in. Mr. Miller had given us a ride up the river, and the plan was to float back to the camp.

We made memories that night! The river was low and running slowly. My tube was deflating as we went, dragging lower and lower in the water, as it got darker and darker. Snakes and alligators were in those waters, so I was screeching over every leaf that touched my foot.

Finally it was totally dark. The stars were beautiful when we could glimpse them through the tree tunnel we were floating under. It could have been a romantic trip, but it was feeling more like a survival trip. I wondered how we would know when to get out of the water since there was no building or marker at the camp. The river was way down at the end of a trail, far from the camp.

We floated for about 4 hours. I wondered if we’d shoot out into the Gulf of Mexico at any moment, but finally, a LIGHT! The Millers had decided we needed rescuing and had come down the trail to the river to shine their lights out onto the river so we could find our way out. I was SO glad to see these blessed people. It was way above and beyond the call of duty for them to rescue us. It was their only day off, with no campers to rescue, and the Evangelist and his fiancé got into trouble. Sweet people!

We feel so privileged to have friends like this, who not only opened their homes, but took care of us too.
Posted by Paul and Vicki Young at 4:22 AM