How's this for a gorgeous house?!? We didn't actually sleep there, but we did tour the castle. I can't show the close up picture because some of those statues are indecent. 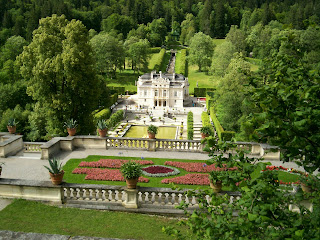 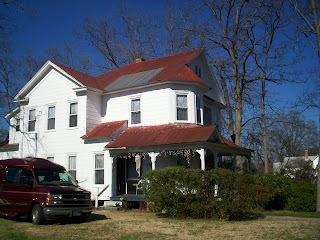 In Connecticut a dear family opened their home to us at the last minute as their pastor had forgotten we were coming and had to quickly scout around for a place for us to stay. The wife especially was a little flustered by it all, and she apologized repeatedly for the supper and for being unorganized. We tried to reassure her that we were just normal people, and that we really appreciated the supper and all her efforts on our behalf. Soon got to know each other and felt at ease.

(One time a pastor’s wife in Iowa protested to her husband who had invited us to dinner, “But I’ve never met them! I don’t know what they like or don’t like.” To this he calmly replied, “Don’t worry, they’ve been to Africa. They’ll eat anything.”

We found this very amusing, and pretty much true, though I don’t know that Africa had much to do with it.)

There were more apologies when they showed us where we were to sleep. They had a cozy den, with the most comfortable fold-out couch we have ever slept on, (queen size and thick mattress) with a bathroom right there, which is always nice. We could see nothing to apologize about, but the host told us he had a clock collection. We assured him we were not bothered by clocks. We didn’t realize what we were saying! The entire wall was covered with dozens of antique clocks. They whirred, bonged and donged, chirruped, coo-cooed, clanged, and buzzed, on the hour, on the half hour, and some of them were even on the quarter hour. He went around and stopped all that he could, but some of them would just have to wind down.

It would take more than a dozen clocks to keep a tired evangelist awake, we discovered. But this evangelist’s wife, who didn’t have children yet to tire her out, spent a memorable night listening to one of the nicest clock collections we have ever seen or heard!

God bless the dear people who risk vulnerability by taking in the traveling man of God when they know that not everything is perfect.

On our one and only trip to the Philippines (so far), way back when we were newlyweds, we were invited to spend a night with a millionaire named George with an unusual testimony. As I remember it, he had become a millionaire selling jewelry in his early 20’s. Then he was kidnapped by his own bodyguards who demanded his fortune for ransom. He lost everything. During this discouraging time, he came to know the Lord, and gave his life to Him.

Now as a Christian, he started over again in the jewelry business, and became a millionaire again before he turned 30. After hearing Paul preach, he invited us to spend the night in his refreshingly cool, marble tiled guestroom.

That beautiful guest room revived me. I had been dragging around the Philippines, encumbered by jet lag and the heat, trying to smile at the right places, but definitely with very little perk. When we slipped into that air conditioned guest room -- Phew! It was nice! I took my sandals off and powdered my feet, and discovered how nice one can slide on marble floors with powdery feet. It was like skateboarding! Paul flopped on the bed, and I slid toward him and playfully dropped on top of him.

After he left us to giggle at how embarrassing it all was, we studied the curtains we had thought were closed, and discovered that they were lace which would have been useful during the day, but as dusk was deepening, our room had become like a stage, facing out to where several (shocked?) women were waiting for their rides.

Overlooking Colorado Springs, CO, we had a funny experience with an anthropologist friend. Kendra traveled about as much as we did, all over the world, and was a fascinating friend. Her home was on a mountain overlooking Colorado Springs, and the decorating style evidenced all her exotic travels around the world. Even the bathroom was original. There was no door on it, and no curtain or covering on the shower. I’d just wave a hand at the lights of Colorado Springs twinkling below and say, “Hello, Dr. Dobson.” And hope he wasn’t really looking.
Posted by Paul and Vicki Young at 7:01 AM