The beautiful home that was renovated by homeschoolers for missionaries in Epsom, New Hampshire. We felt like the snow was a special blessing just for us because it arrived during our first night in the USA in 2007. 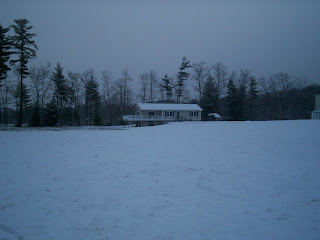 Some of our 100 houses have been church guest rooms, or “prophet’s chambers” inspired by the lady who kept a room for Elisha to stay in when he passed by. These are wonderful places to stay in, to come apart for awhile, to not feel like you’re bothering anyone, and to have no hotel expense, and we have been so thankful for them.

We had our favorites as we traveled across America. Out in Kansas there’s a church who keeps a whole duplex for missionaries. They built it especially for that, and entering it is like stepping into a model home, complete with a gift for the family! What a delight after a long trip in a car, to come to a place where the family can spread out, and relax!
* * *

In New Hampshire, two homeschooling families wanted to teach their sons carpentry skills, so they volunteered for the job of readying a house for missionaries. A derelict house was moved to church property, and transformed. It was gorgeous when we saw it! We got to stay in it for nearly two weeks. The first week we were a whole family in a time warp, struggling with jet lag. No one, not even the grandparents, would have wanted us then! We were all very wide awake around 3 o’clock the first morning, and the kids were bursting to get out into the new fallen snow. (You’re not used to snow when you live in Africa!) We would not have been the best visitors that time, and I’m so thankful we had our own place to stay in until our internal clocks got on the right time zone.
* * *

That church and others also stock these delightful guest rooms with books and videos or DVD’s, as well as lots of food, which show their consideration for those of us who travel as families.

One church in Georgia has a guest room with a king size bed (Yippee! Did I mention that Paul is 6’10” tall?) that opens out onto their gym. It’s always a treat to get there and let the kids run wild chasing balls for awhile.

Another Georgia guest room won our prize for the prettiest lighting. It was so romantic. It also had a bulldozer parked outside which fascinated our boys.

A third Georgia church has their prophet’s chamber come complete with a huge Jacuzzi! Well, it opens into the baptistery, and the pastor said we could take a dip if we had a mind to. We didn’t, but it was tempting.

It seems every prophet’s chamber has its perks, something special that endeared it to us. We like being close to the church so that there’s no travel time, and we’re right there ready for anything. Some have been as simple as a foldout couch in a Sunday school room. You just have to be sure you don’t lock yourself out of your room when you run across the church to use the rest rooms…as Paul discovered once when he was single. One feels a bit conspicuous in bare feet and a towel in a church.

In Germany a military church has a guest room right in the church, and our kids slept on inflatable mattresses in the church nursery. We thought that was nice, but then they did more: they sent us on a trip to Bavaria! We traveled through the Alps, slept in a chalet, and toured two of King Ludwig’s castles that could have come from the pages of a fairy book. We feel so blessed, and thank God for these perks which come “out of the blue”. It is all His mercy, sent by His people, and giving us fresh visions which help in more tedious times or when it’s our turn to do more of the giving.

In Warner Robbins, Georgia a church keeps a double wide trailer free for their missionaries way back in a field behind the church. Being in a field made me feel free to walk around in bare feet without danger of shocking anyone, but we were still close enough to town to walk over to bookstore for a browse.

“and Southington,” call my children and my husband when I ask which prophet’s chambers have stood out to them. “Megan’s church” in Albany, Georgia has let us use their prophet’s chamber even if Paul’s not speaking in their church. Once or twice when we asked if it would be okay to use their prophet’s chamber, and they’ve said, “Come ahead”, we arrived to find it full, and they put us in a hotel as their guests. Things like that make a person feel very small and unworthy, but thankful for their kindness.

“Casey’s church” in Thomasville, Georgia has not only welcomed us but our family and friends too. One time we had a Peruvian friend traveling with us for a few weeks before she went to Bob Jones University on a scholarship. The church welcomed Cecilia right along with us, and she ended up sleeping in the pastor’s study as it was the only other room that was air conditioned. She thrilled to the rain that comes down in torrents on hot, south Georgia days in contrast to the desert of Lima, with rarely more than a millimeter of rain per year.

Southington is in Connecticut, a dear church that puts up with a lot from us. We always seem to be arriving late at night and some long suffering person lets us into their bright, beautiful guest room. That’s a church you have to be a be careful in, as you can bound out of their guest room in the morning, and find yourself disrupting a serious class of Bible College Bible study.

We know two churches which have had people die and leave their homes to the church. Each has a special story.

In Michigan, a poor woman got saved through a nearby church, and continued in the things of the Lord, while her miserly, tyrannical husband made fun of her at home. She obeyed 1 Peter 3:1, “Likewise ye wives, be in subjection to your own husbands; that if any obey not the word, they also may without the word be won by the conversation of the wives.” It took many years, but that gruff, stingy man seems to have turned to the Lord while watching Billy Graham on TV just a few days before he died.

With her husband gone, the widow was left with very little money, but at least she was now free to begin cleaning up their little home that he had not allowed her to clean before. The yard was overgrown with weeds and full of rusty remains of old vehicles and other junk. It was a huge job and her friends from the church came to help. Someone was getting ready to tow away an old truck out from the overgrown field that should have been the lawn beside the house, when he found $20,000 in the glove compartment! From then on, the cleaners cleaned as though they were on a treasure hunt. They found more money stashed in hiding places, and the poor widow found she had plenty to live on.

She lived in that house, and served in that church for the rest of her life. She willed it to the church when she died, and they kept it much as she had it, neat as a pin, nicely furnished, and with the traveling woman’s dream: a washing machine and dryer in the basement.

I loved hearing the story of that house when we stayed there. I felt like I could get a little acquainted with the widow lady as her books and cassettes were left there for missionaries to enjoy. This is the clearest example I’ve ever seen of the truth of the Proverb, “The wealth of the sinner is laid up for the just.”

In New York an old man died and left his little house to the church. They named it the Charity House and keep it spick and span clean for missionaries. We’ve stayed there many times, but my first time stands far and away the most memorable of all of them, though I wondered if they’d ever let us stay there again after what we did. I’ll tell more about that in the next chapter.

Posted by Paul and Vicki Young at 3:58 AM